Seahawks coaches need to be held accountable for sloppy start 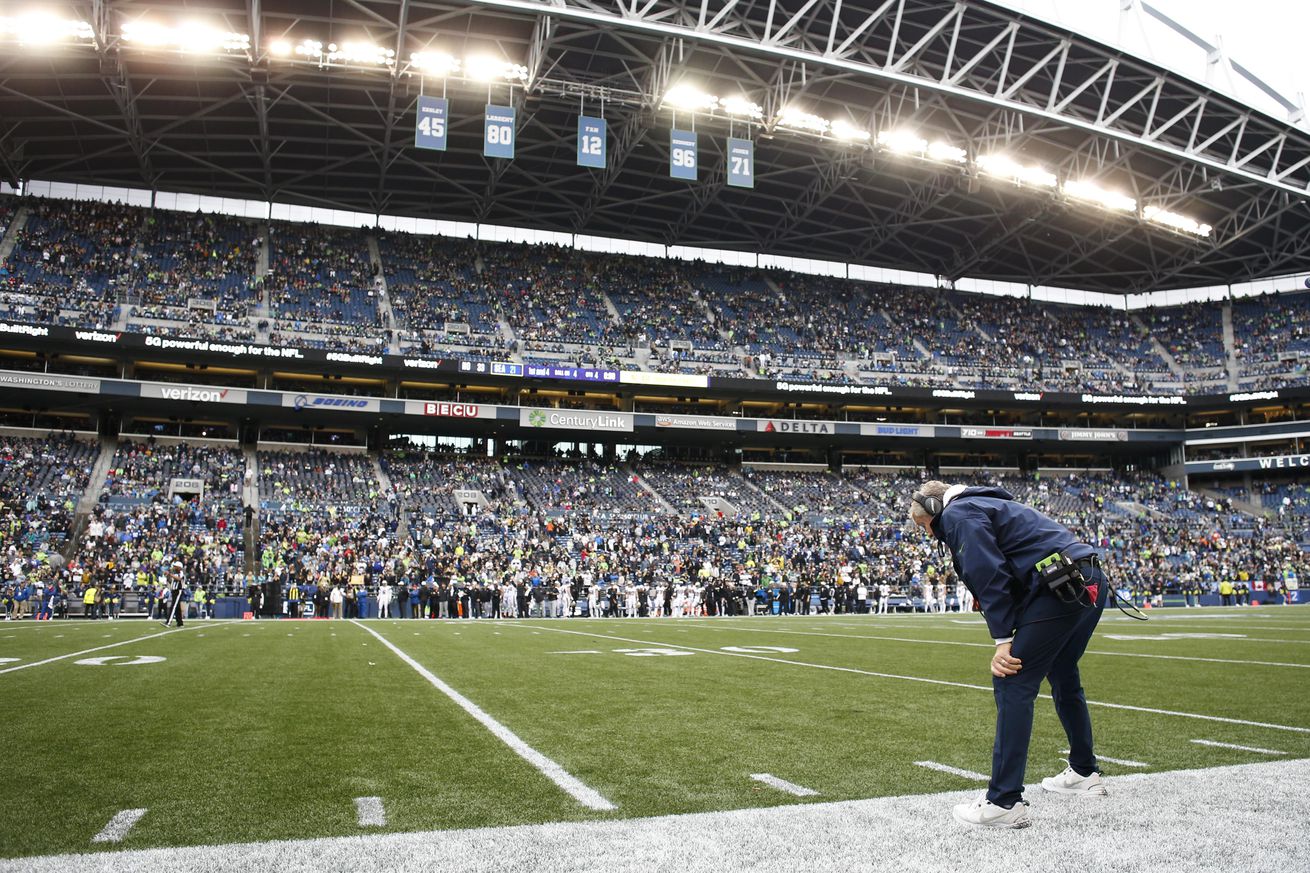 Sunday’s game against the New Orleans Saints was one meaningless time-expiring touchdown away from a rare double-digit loss for the Russell Wilson-era Seattle Seahawks. It feels bad, and it easily could have been much worse.

Had Will Dissly not secured the catch as the game concluded, it would have been Seattle’s fourth double-digit loss in the last eight seasons.

# of double-digit losses for every NFL team since 2012

Seattle fans have enjoyed an absolutely ridiculous stretch of seeing fewer terrible Sundays (Mondays, and Thursdays) than even the Patriots.

It might be why said fans tend to do strange things, like lose faith in the team after a win.

Seattle has not been a bad team for a very long time. The fact that they never get obliterated means that they’ve also been a well-coached team over the years. And that’s what makes some of the following thoughts all the more difficult.

Russell Wilson put on another $35 million dollar show that nearly masked an enormous amount of inexcusable mistakes from kickoff to game end. Mistakes made by both players and coaches. Do you ever stop to think what would happen if this current team had just an average quarterback? I for one don’t have the stomach for it.

I do not believe Chris Carson’s fumble cost the Seahawks this game. At that moment, it sure felt like the worst play of the 2019 season so far. But by the conclusion, it was obvious that Carson did not lose this game.

Nor do I believe that any of the endless individual mistake-riddled moments cost Seattle this game.

What follows is an observation of patterns. A recognition that something is off with the joint decision-making coming from Pete Carroll and staff. At best, it’s stagnant and temporarily confused. One hopes it’s not irreparably broken.

These are systemic problems.

Pete Carroll’s timeout usage is atrocious. It has been for some time, and he has pulled off some of the most uniquely inane timeout calls many of us have ever seen. Furthermore, Carroll will treat NFL timeouts like both monopoly money and precious heirlooms in the same game – in the same half even.

Fact: On Sunday, Seattle used a timeout to avoid a penalty for twelve men on the field. They did that twice. In the same game. Once on offense and once on defense, so let’s share some of the blame between all the coaches here. The breakdown at the beginning of the second quarter in particular is the killer.

What’s worse than starting from your own two-yard line? Statistically, basically nothing. Here’s scoring probability based on starting field position. Note the sheer lack of difference between 98 yards to go and 99 yards to go, based mostly on the inability to even find any dots over in that tiny corner:

A penalty in that spot would have moved Seattle backwards exactly three feet. It also would have reset the game clock and saved a timeout, which should have mattered in this game, but obviously didn’t.

Because fourteen minutes later, on the final drive of the half, after a nine yard completion to Nick Vannett, no timeout was taken. Seattle let the clock dribble down to ten seconds before the next play, which took exactly…ten seconds. DK Metcalf once again did a DK thing, but with three two timeouts still in hand, the clock expired during the play. Seattle ended the first half by running out of time well into the red zone. What followed was a very awkward trot of shame back through the tunnel instead of taking a shot at the uprights or the endzone.

Neither timeout decision made a bit of sense by Pete Carroll. Or Russ. Or whatever timeout philosophy Pete has imparted to Wilson over the last seven years. It’s bad, it’s been bad, and it continues to create costly time management problems for this team.

There exists an ad hominem argument I bought into, as I’m sure many others did as well. The common message time and time again is that a Pete Carroll team is about running the ball, playing great defense, and not giving up the big play. Jim Nantz said it at least twice during the broadcast.

What this does not mean, is that Pete Carroll cares deeply for the basics and fundamentals of football. Whether he cares or not, I do not know. What is very apparent, is that his teams are not solid fundamentally. Three examples from this game -

Sunday night was a far cry from Pete’s once-established machine that seamlessly cranked out tackling monsters.

It was not good. Not at all. Multiple players on the defense had multiple missed tackles. Pro Football Focus gave harsh grades to Al Woods, Delano Hill, and Mychal Kendricks – all for very subpar tackling.

Granted, Alvin Kamara may not be entirely human, but this is not entirely new or limited to Kamara.

Three games in finds the Seahawks 8th in the NFL in penalties per game. This is not exactly the right place to crack the top-10, and yet, this is actually an improvement over recent years. Carroll’s players were 7th in this category in 2016. The years 2013, 2014, and 2017 saw Seattle as the most penalized team in the league.

That’s back six seasons. It’s very popular to note that Russell Wilson, Bobby Wagner, and KJ Wright are the only remaining stars from that 2013 Super Bowl Team. Which means there’s been a whole lot of player turnover. Which means that Pete is either extraordinarily unlucky in his team composition, or that penalties are not coached out very well. Every indication is that the yellow flag train will continue to chug through this season.

Exhibit C: Random and inexplicable things that players do

Al Woods did something inexcusable when he lined up over center in the 3rd quarter, costing Seattle seven points. Carroll’s fault? Not really.

But twelve men were on the field (and ready for the play) twice. Two time outs.

And then Tedric Thompson walked onto the field for some high-fives. Another penalty.

And the penalty is for a non-uniform player coming onto the field from the Seattle bench. #Seahawks are making up ways to gift things to the Saints today. Damn.

And that’s just one game. Long-term Seahawk fans could talk endlessly about the brawls during practice, about flipping off one’s own coach, about not getting on the bus, about apparently never teaching Michael Bennett how to line up onsides. There’s an undertone of the player empowerment that Carroll so fiercely advocates, which seems to frequently show up in new and unforeseen ways to cost yards, dollars, or draft picks.

Problem Area #3: Failed Identity on a whole bunch of levels

Here’s one of the biggest concerns of 2019 Seahawk football:

Worst rushing offenses in the NFL by expected points added. No team has focused more effort on running the ball well than the Seahawks, probably. pic.twitter.com/MlP439Yq9y

Obviously, one half of this is nothing new. The Seahawks want to run the ball. The other half, however, is startling: the Seahawks are currently really bad at it.

Furthermore, there are several indications that this is actually an above average to elite passing offense. The aforementioned stat about Russell Wilson’s performance, for one. Tyler Lockett’s perfect QB rating he gifted Wilson when target last year, for another. This new rank on DK Metcalf, for a third:

D.K. Metcalf has a 91.1 receiving grade on "Go" routes this season, ranking 1st in the NFL. #Seahawks https://t.co/CRjWlS5dPO

For another, Seattle currently has the 8th most efficient passing offense in the league by DVOA. They’re currently 17th in DVOA as a running team, despite boring us all to pieces at every press conference.

Lastly, Russell Wilson is 2nd in the history of the NFL in TD-INT ratio at 3.22.

So why keep running? Straight from Pete Carroll’s mouth:

But Russ.. doesn’t turn the ball over. Just once this season; hardly any times in any season. If it’s a rationale that has helped coaches and teams in the past, it’s not one that makes near as much sense when you have as saavy a quarterback as Wilson.

The argument could be made that running the ball keeps the defense off the field a little longer, which is at the same time a poor showing of confidence and altogether unfamiliar to Seattle’s mentality. We used to beg for the offense to be gone so that the defense could go score somehow. The argument could also be made that passing gives Seattle a greater chance to build an actual lead, which would make fans stop and stare as hard as we all did during the last solar eclipse.

Derek Carr gets twice as much of a chance to expand his team's chances through the passing game when ahead than Russell Wilson does. Mahomes, of course, gets precisely what he deserves and demolishes everybody. pic.twitter.com/u428BmrwE7

Abysmal tackling, killer penalties, a pointless commitment to an ineffective run game, and a lack of timeouts when needed sent Seattle right out of the playoffs last year. It’s disappointing at best to see every one of these trends continuing into the 2019 season. At some point, somebody on the Seattle coaching staff is going to need to come down hard and make some tangible changes to a team that truly has some of the best players in the league.

Jerry Jones on Taco Charlton: When he didn’t get there, he just wilted