The Ace Pod 1.8: We Were Promised Jetpacks 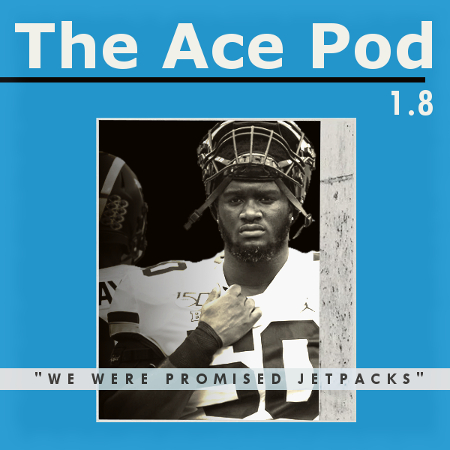 This week’s mailpod tackles a number of questions—for some reason those weren’t hard to elicit this week—on topics including:

If that’s not enough, I also made a guest appearance on The Seventh Circle Podcast, which was recorded before the Wisconsin game but published on Saturday, making a bit of my optimism at the end sound borderline delusional. But it was nice(?) to remember that we’ve dealt with much worse and I had a lot of fun being on the show, which I’d recommend even if they weren’t so kind as to feature my ramblings this week.

“Someone Else’s Problem” — We Were Promised Jetpacks

Spend some time with your family or something. Pet a dog.

Love the title. These Four Walls is one of my favorite albums of all time.

One of the biggest issues with this season is the preseason expectations in relation to the "conditions on the ground."  Essentially Michigan was ranked #7 because of good wide receivers and reputation.  It is a team that legitimately collapsed in numerous ways toward the end of the season and lost a shit ton of talent to high NFL selections.  It was a team trying to turn over an offense almost specifically because of what it was losing on defense in an attempt to be able to "catch up" with opponents who were inevitably going to score more points on us.  It is a team that lost key assistants and who had their defensive coordinator realistically considering jumping ship for a head coaching position.  Injury rumors were rampant and two pretty high profile transfers, one at our biggest defense position of need, had kind of zapped depth already.

I was among some people who thought the preseason ranking was kind of ridiculous.  This was usually met with distain but I kind of had the position that I did because I thought the ranking was kind of setting the team (and the coach) up for failure.  It almost felt somewhat "intentional" toward Harbaugh.  It is easy to say that Harbaugh contributed to the unrealistic expectations, but really did he?  What coach of a high caliber program is not going to say that he believes his team has the personnel to win the conference?  That is not some bold declaration of dominance.  In reality Harbaugh's preseason discussion of his team sounded more like "ehh kind of a shit show but we shall see. (And Ronnie Bell is awesome)."

Now that does not excuse them being like that so far, but at no time did this team look like a world beater on paper, yet by opening weekend people were talking national championship.

The Newly Promoted Premier League Teams Are Playing Like They Belong

The Marlins Extend Their Shortstop