In Real Sports interview, Richie Incognito denies bullying Jonathan Martin: “Was this a case of bullying? Absolutely not.” 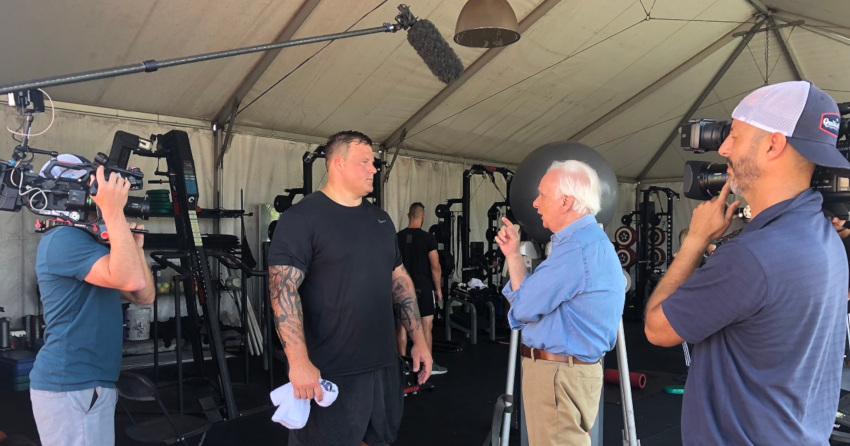 Richie Incognito played his first regular-season NFL game since 2017 Sunday, which came after he served a two-game suspension from the league for violating the NFL’s personal conduct policy. That suspension was over an April incident at an Arizona mortuary that had the body of his father; mortuary employees said that involved Incognito punching caskets and throwing things, demanding his father’s head be cut off for research, and even threatening to shoot them, and the police arrest video TMZ released earlier this month from that incident doesn’t exactly make Incognito look great.

And that’s just one of many incidents Incognito has been involved in. He’s been accused of using racial slurs both on the field and in the 2013-14 Dolphins bullying scandal, he threw weights and other equipment at a gym user in 2018 (an incident that ended with Incognito placed on an involuntary psychiatric hold), he was convicted of assault over beating up students at a party while at Nebraska, he was accused of sexual battery in 2012, and his behavior has seen two college teams (Nebraska and Oregon) and two NFL teams (the Rams and Dolphins) part ways with him.

Thus, the Raiders opened themselves up for a lot of criticism by signing Incognito in May. And an interesting element there is that Incognito hasn’t exactly said a whole lot about his past behavior since then. But he did open up recently in an interview with Bernard Goldberg for HBO’s Real Sports with Bryant Gumbel (in an episode airing tonight at 10 p.m. ET/PT; we viewed an advance screener of it), and that interview includes Incognito saying some things that may draw further criticism to him, especially when it comes to the bullying scandal (and particularly the portion of it involving Incognito and Jonathan Martin). In fact, Incognito denies that his actions constituted bullying. Here’s how that portion of the conversation between him and Goldberg went, with Incognito expressing regret over sending Martin racist and homophobic texts, but saying the NFL report was “unfair”:

INCOGNITO: It was obviously something I regret. It’s the one line I can’t cross- sometimes you say the worst things to the people closest to you, but I definitely don’t feel that that makes me a racist person.
GOLDBERG: He was a soft spoken guy. You drove him out of the league.
INCOGNITO: I did not drive him out of the league. I believe his mental health issues, and his –  demons in his past drove him out of the league.
GOLDBERG: But there was a 144-page report that accused you of relentlessly bullying him.
INCOGNITO: I think the report was unfair to my side of things. I think the gentleman, who did the independent investigation, came in with the preconceived notion that I was guilty of doing this. I fit the bill. Hey, racist, homophobic, whatnot. What I’m saying was, we were close, personal friends, It wasn’t factored into, ‘Hey, this is guy talk, these are two alpha males talkin’ to each other.’ Was some bad shit said? Absolutely. But was this a case of bullying? Absolutely not.

It’s interesting that this is one particular part of Incognito’s past where he’s still defending himself. His comments on the mortuary and gym incidents feel more reflective on the problems he caused and the substance usage that contributed to those situations (on the gym, “Spun out, paranoia to the Nth degree. I had not been taking care of myself for so long – you’re talking lack of sleep, not eating, marijuana, drinking, heavily … days, and days, and weeks on weeks on end,” and on the mortuary, “I thought I was acting normal. You, you couple in the days not sleeping, then the heavy marijuana use, plus the drinking, all that is a recipe for disaster for a person like myself. …I definitely understand their fear. And I’m sorry for striking that fear into them”). Here’s a clip of his discussion on the mortuary incident:

But when it comes to the Martin situation, Incognito is admitting some regrets, but still not taking a lot of responsibility for his actions. And yes, Martin has absolutely shown some problems of his own, including charges of criminal threats in 2018, but that doesn’t mean Incognito’s behavior was acceptable. And Incognito still not recognizing that his actions in that case count as bullying isn’t a great look for him.

The Real Sports segment here is valuable for getting Incognito to open up about these past incidents in greater detail than he has, but it should be noted that it’s mostly just Incognito answering questions from Goldberg (with some interspersed footage from NFL games and from those arrests). The only other subject interviewed is Mark O’Brien, the man Incognito threw weights at in 2018, and O’Brien says he was sympathetic to Incognito thanks to his own past mental health challenges. Martin declined to be interviewed.

Overall, this piece is notable for getting Incognito on the record about these past incidents, but what that actually means is left up to the viewer. Incognito says “I’m working hard to kind of differentiate from that person and really not make the same mistakes that I have made before to put me in those situations”; some may agree with him and think it’s worth giving him yet another chance in the NFL, while others have already stated that they don’t think it’s worth it given Incognito’s history of violence and other bad behaviors. And really, this piece gives both camps some ammunition; Incognito’s defenders can point to him recognizing where he’s gone wrong in the past, but his critics can point out that he still doesn’t seem to get why his behavior in the Martin situation was so wrong.

This episode of Real Sports with Bryant Gumbel premieres Tuesday, Sept. 24 at 10 p.m. ET/PT on HBO. Other segments in the episode include David Scott interviewing the New Zealand All Blacks’ first Muslim player, Sonny Bill Williams, and Jon Frankel reporting on why many girls are being steered away from playing baseball. The show is also available on HBO NOW, HBO GO, HBO On Demand and partners’ streaming platforms.

The post In Real Sports interview, Richie Incognito denies bullying Jonathan Martin: “Was this a case of bullying? Absolutely not.” appeared first on Awful Announcing.

Lano Hill, the Seahawks’ quick passing game to be tested vs Saints