Cowboys news: Sunday night preview; can the Saints give the Cowboys their first loss? 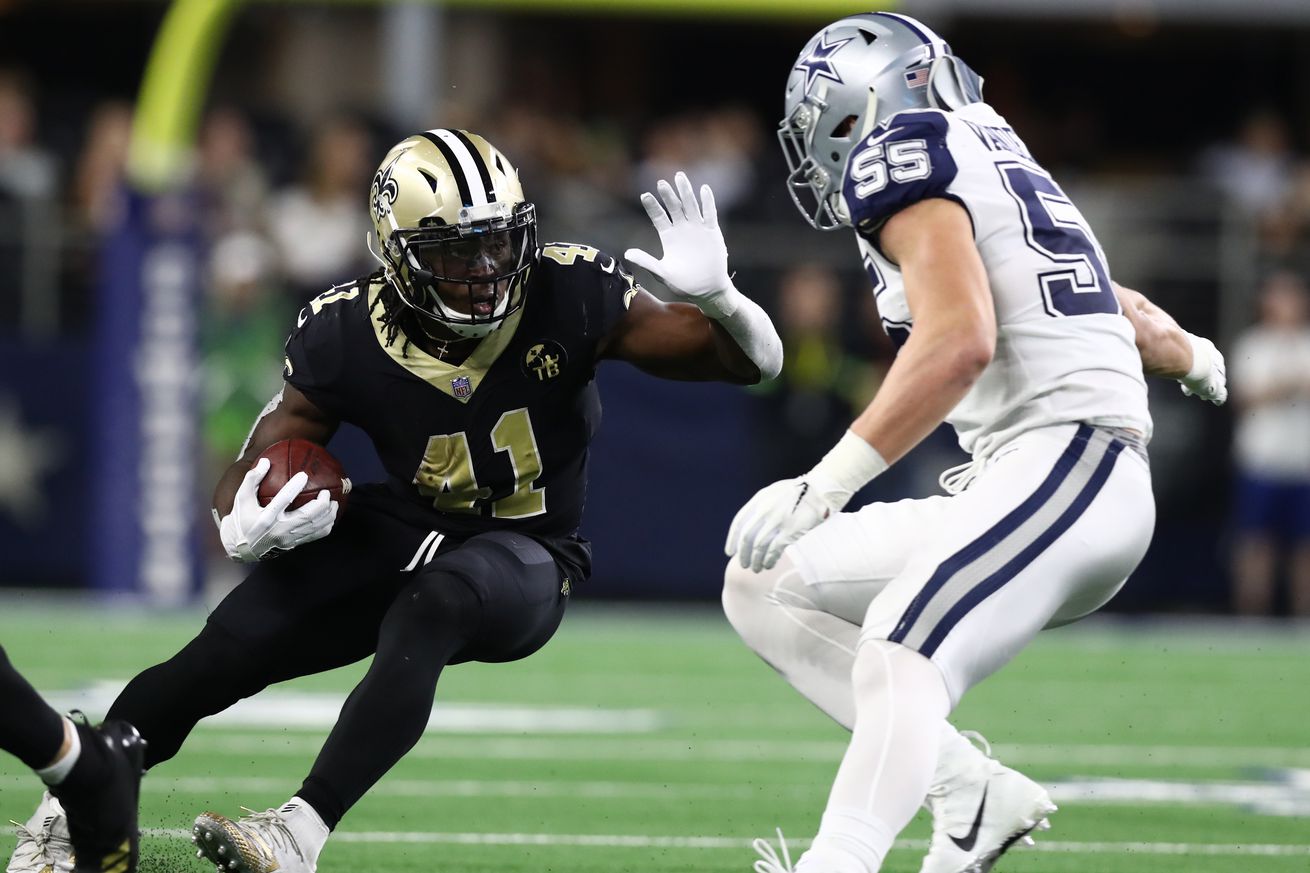 Here is your daily dose of Cowboys news...

Nick Eatman covers five different storylines for each team as the Cowboys get ready for their big Sunday night matchup with the Saints.

While his first two seasons saw him as more of a complementary back that can run and catch the ball, Alvin Kamara is now every bit the featured back for the Saints, and he’s thriving in the role. Last week against Seattle, Kamara carried – literally – the Saints to a road win. He played 88 percent of the Saints’ offensive snaps. He rushed the ball 16 times for 69 yards and also had nine catches for 92 yards and a touchdown. Last year against the Cowboys, Kamara was held to just 36 yards rushing and 36 receiving.

What else should we expect from Sunday Night’s big matchup with the Saints?

When many found out that Brees was going to miss the highly-anticipated matchup, it was assumed that the Cowboys would now have a much simpler task at hand. But after the Saints’ 33-27 win over the Seahawks in Week 3, it appears that is not the case. New Orleans had a special teams touchdown and a fumble recovery for a touchdown during the win in Seattle to help take the pressure off of Bridgewater.

But that doesn’t mean the sixth-year QB had a bad day. He finished 19 of 27 for 177 passing yards and two touchdowns, picking up a win on the road against a 2-0 team in his first significant start since 2015. He wasn’t sacked once and did not turn the ball over. The Cowboys defense has had issues generating sacks and creating turnovers, which may work in Bridgewater’s favor.

The game was also Sean Payton’s first Saints win without Drew Brees (only four total games). The last New Orleans quarterback to win a game not named Brees was Aaron Brooks in 2005.

Cowboys’ defense not downplaying Saints in absence of Drew Brees: ‘Teddy Bridgewater is a hell of a player as well’ - Patrik Walker, CBS Sports

The Saints may be without Drew Brees, but nobody is taking Teddy Bridgewater lightly.

Bridgewater may not have played lights out in his first start of 2019, but he was efficient -- took no sacks, didn’t fumble and didn’t toss an interception. Aided by the usual suspects in running back Alvin Kamara and wide receiver Michael Thomas, the Saints held a 27-7 lead through three quarters in Seattle before the defense began to struggle against Russell Wilson in the fourth session.

Jerry Jones has seen what Bridgewater can do from afar -- both on the ground and in the air -- and will do his part to make sure the Cowboys are locked in for a primetime showdown that could launch them to their first 4-0 start since 2007; when the team finished 13-3.

”The [Saints] have so much team-wise to compete with, as they demonstrated out in Seattle — of all places,” Jones said to 105.3FM The Fan on Tuesday. “From top to bottom, they’re built for action and built to play and built to win football games. They think way ahead. That Teddy Bridgewater, everybody knows he’s a talented football player — especially with people like Sean Payton tutoring him — he can be everything you want in a quarterback.”

The Cowboys should get a couple of their defensive starters back for Sunday just in time for the big game.

Christian Covington and Darian Thompson acquitted themselves well in place of the defensive starters and will continue to be valuable role players for the Cowboys moving forward. However, getting starters back on the defensive side of the ball against one of the best offensive teams of the last fifteen years will be huge for the Dallas Cowboys chances to pick up the win on the road in New Orleans.

Having Antwaun Woods back is important for the 1-technique defensive tackle rotation. Christian Covington provided some nice pass rush, picking up a couple of quarterback pressures on Sunday against Miami. It’s a position that the Dallas Cowboys like to rotate to keep fresh, so having Woods back, who’s the only true 1-technique on the team would be very beneficial.

Though Thompson played well in his first start at free safety, Xavier Woods has been one of the best defenders for the Dallas Cowboys this season. Having him available would be huge for a matchup against Sean Payton’s Saints.

NFL Power Rankings: Backup QBs aren’t all bad in Week 3, the Eagles take a tumble and the Packers are dominating - Lindsey Jones, The Athletic

The Athletic does their weekly power rankings and the Cowboys stand pat after doing what everyone expected them to do.

We are bracing ourselves for comments that the Cowboys are overrated because of their lack of quality competition so far, with wins against the Giants, Redskins and, most recently, Dolphins. But it says something about how much Dak Prescott has progressed and how dangerous the Cowboys could be that even in what was a fairly sloppy game against Miami — Prescott threw a pick and completed less than 60 percent of his throws — the Cowboys still won easily.

Their most challenging divisional foes were not so lucky.

The keyword here for Philadelphia is drop. As in: Dropping the football. And: Dropping in the poll. The Eagles’ sloppy offensive play, with key drops from receivers Nelson Agholor, Mack Hollins and JJ Arcega-Whiteside, is the biggest reason the Eagles lost to the Falcons, and then tumbled eight spots in our rankings. And while this technically isn’t a GIF, this video is the best thing you may watch all week, and the perfect encapsulation of the Eagles’ problems.

Rob Phillips has three topics for discussion as he prepares for the Saints, including how the dynamic duo of Ezekiel Eliott and Tony Pollard have the Cowboys running game humming.

Just consider Elliott’s workload in 2016-18. According to Pro Football Reference, he’s one of five running backs in NFL history with at least 850 carries and 130 catches in his first three seasons. Here’s how it breaks down:

Elliott has led in the league in rushing yards, and carries, two of the last three years. He still managed to rank 10th in both categories in 2017 (242 for 983) despite a six-game suspension.

Forget Karl Malone. Zeke is pro football’s Mailman. Now, Pollard’s week-to-week role is still being cultivated. But the Cowboys showed faith last Sunday that he could help salt away the game. He dominated the offense’s final drive: five carries, including a 16-yard touchdown run, on the five-play series. “It’s us taking care of it together,” Elliott said afterward. “It’s going to definitely pay off.”

Why the Cowboys, Dak Prescott have an improved offensive line to thank for their newfound firepower - David Moore, Dallas Morning News

The Cowboys have more than twice as many points this year as they did after three games last season and the offensive line has played a big part in that.

Marc Colombo in his first, full season as the team’s offensive line coach has hammered home the protection principles that eroded last season. The players worked on it in the offseason without the coaches around. Frederick is back and left guard Connor Williams is bigger, stronger and more experienced than he was as a rookie.

None of the sacks this season fall on the line. Prescott ran around for nine seconds before former teammate Taco Charlton got to him in the Miami game. Prescott also took responsibility for the sack against Washington, telling the offensive linemen after the game it was on him.

That being said, Prescott isn’t holding onto the ball nearly as long as he did last season. He’s made a concerted effort to get it out quickly. “Having that time in my head when it comes to me knowing my read, just getting the ball out,’’ Prescott said. “But it’s a credit to those guys protecting and the receivers getting open within that time.

Cowboys may be on top of the NFL standings, but Dallas is still working on meeting its own standards - Michael Gehlkin, Dallas Morning News

The Cowboys are off to a good start, but what does that mean? Statistically speaking, good things.

The Cowboys worked through an early scare Sunday to pull away from the dismal Miami Dolphins in a 31-6 win at AT&T Stadium. The result gave the franchise its first 3-0 start since 2008 and an early two-game lead on the rest of the NFC East.

3-0 starts bode well The Cowboys are 3-0 for the 16th time in franchise history. Dallas failed to make the playoffs only once the previous 15 times:

The Cool One lets us know that things are looking pretty good when it comes to watching our team play in the postseason.

Week 3 is also interesting for the seven teams (including the Cowboys) that started the season 3-0, because those teams are already on a playoff track, as their historic playoff odds are already quite high at 70%. The table below shows what the playoff odds have looked like over the last 17 seasons by W/L record after the third game of the season.

A 70% chance after three weeks sounds like a pretty sweet deal, but the important question is this: Are the 3-0 Cowboys good enough to maintain their early performance over the rest of the season?

On the same day New Orleans lost Drew Brees, a significant part of the Cowboys’ fan base lost something else - Tim Cowlishaw, Dallas Morning News

Any hopes of Sean Payton becoming the next Cowboys coach was squashed on September 15th.

Brees had thumb surgery last week, and that has much to do with how the Cowboys find themselves 3-point favorites heading to the noisy Superdome for what promises to be a crazy Sunday Night Football matchup.

And yet it was that same Sunday that a segment of the Cowboys’ fan base -- and I’d say it’s significant in size -- learned it won’t get what it truly covets from New Orleans.

The Saints announced that Payton had agreed to a five-year extension, effectively keeping him on New Orleans’ sideline through the 2024 season. It seems a silly discussion to have with the Cowboys -- one of seven 3-0 teams in the NFL this season -- and yet we all know Jason Garrett’s status and future as head coach here will be determined in January and not by his mounting win total.

Dak Prescott and Ezekiel Elliott are ballin’ right now. We’re talking about it.

Golden Nuggets: Watch the highlights from the Steelers-49ers