Our Brief NFL Holding Nightmare May Finally Be Over 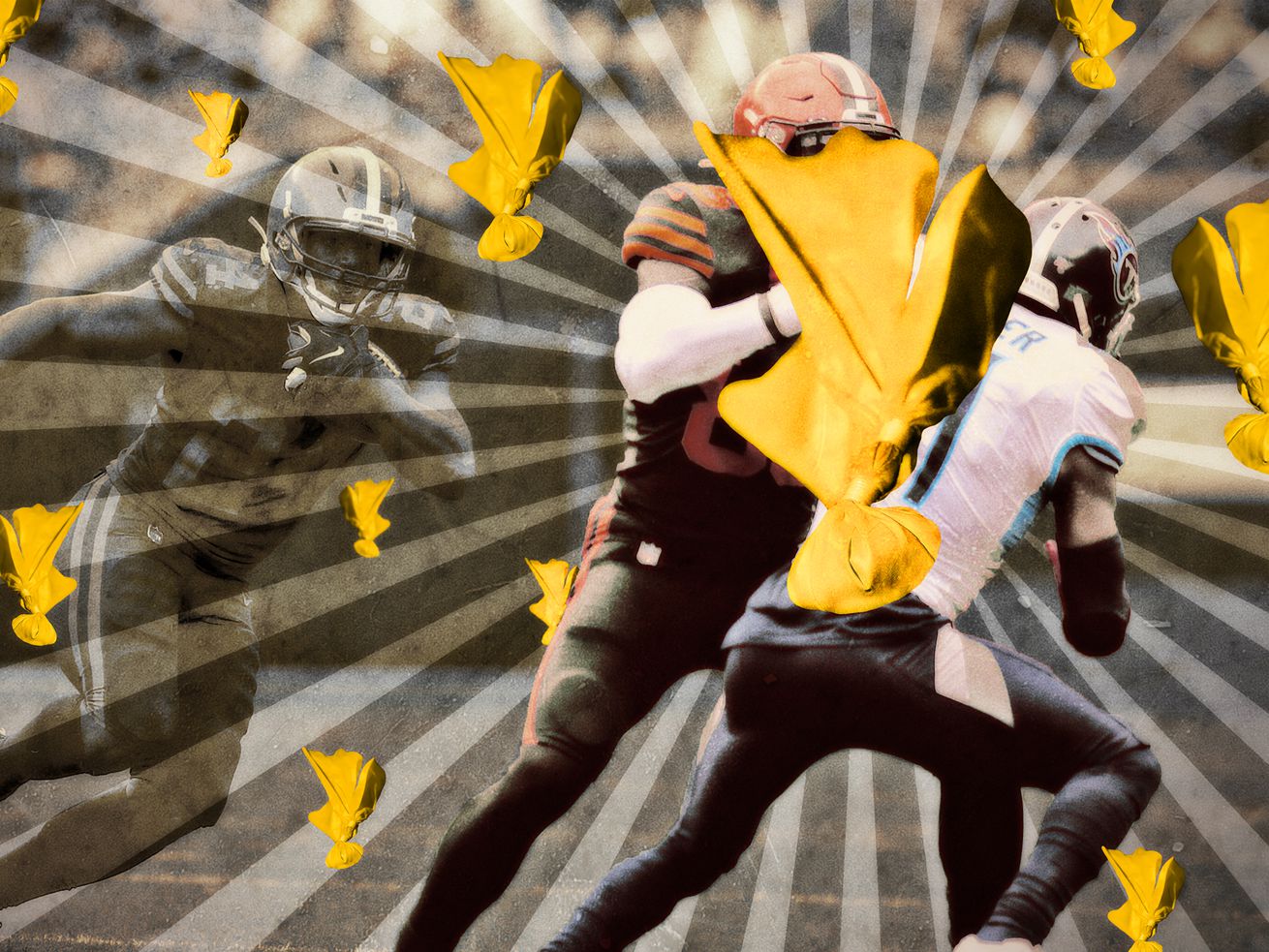 After a dramatic spike in the number of offensive holding penalties this season, the league told officials to pull back on Sunday. Is the game back to normal?

Something shocking happened during last week’s game between the Tennessee Titans and Jacksonville Jaguars: It received national attention. Not because it was a good game, but rather because Tom Brady tweeted about it.

Too many penalties. Just let us play!!!! #TENvsJAC

Brady was right. The Titans-Jaguars game featured eight offensive holding penalties in the first half. Just seven minutes later, Brady tweeted again that he was turning off the game.

Brady wasn’t nitpicking; he was pointing out a leaguewide trend. In 2018, offensive holding was called 2.8 times per game, but in the first 33 contests of 2019 (all of weeks 1 and 2 plus that Thursday Night Football game) there were 5.7 holds per game, according to ESPN’s Kevin Seifert. That’s more than twice last year’s rate.

That type of change doesn’t happen by accident. This offseason the NFL changed how officials call holding on the backside of outside run plays to eliminate something called a lobster block (more on that later).

“NFL defensive coaches were complaining about a specific type of block that they did not like,” said former offensive lineman and current SB Nation writer Geoff Schwartz, who played for four teams across six years. “They wanted more holding called. So they got more holdings called. The problem is when you ask officials to look for one specific block, they’re going to be on high alert for any type of holding now.”

It’s akin to handing referees hammers and telling them to hit only a special kind of nail. But people wielding hammers start looking for any nail. Holding was already the most common penalty in football, so when referees doubled the holding rate, it significantly raised the rate of penalties as a whole. Through two weeks the league had 7.9 penalties per game, the most in Pro-Football-Reference’s database, which goes back to 1941.

But then Tom Brady tweeted that he was turning off Thursday Night Football, which the league charges Fox roughly $60 million per game to air, and two days later the extra holding calls went poof like a fart in the wind. NFL vice president of officiating Al Riveron held a conference call with referees on Saturday, September 21, when he reportedly told officials good job on calling holds on the backside of run plays (the special nails), but that they needed to chill elsewhere.

“Basically what [Riveron] said to them was ‘You’re doing a good job based on what the competition committee wanted you to do: call holding on the backside of the play,’” former vice president of officiating Mike Pereira said on Fox Sports on Sunday. “‘But let’s not overreact.’”

The impact was immediate. Sunday featured just 2.9 holding calls per game according to ESPN, right in line with figures from previous years. Two days after Brady’s two tweets, the issue was fixed. Schwartz said he wouldn’t be surprised if the edict had even been given to the Thursday Night Football referee crew midgame, considering there were eight first-half holding calls and just two in the second half after Brady’s tweets.

The league’s refs abandoning offseason standards before September ends isn’t a one-off aberration—it’s the new way the league handles penalties. Last year, the early season issue was roughing the passer. The league asked defenders to sack the quarterback gently, and refs made two early high-profile calls against Packers pass rusher Clay Matthews, but the league lowered the bar for those calls shortly afterward. In 2018, there were 9.6 roughing-the-passer penalties called per week from Week 1 to Week 5 and then 5.5 per week from Week 6 to Week 17, according to NFLpenalties.com. That wasn’t even the only penalty that spiked in the same time frame and then leveled off. Referees called illegal contact in the first month of 2018 at three times the rate as the first month of 2017, but then quickly pulled back, according to ESPN. The NFL’s competition committee also introduced a rule forbidding ball carriers from lowering their head on contact that sparked roughly 200,000 penalties through two weeks of exhibition, making it clear that referees can’t judge in real time whether a player lowered his head in a collision sport. The league adjusted how it would enforce the rule on one of those referee conference calls after Week 2 of the preseason.

“It was extremely difficult and really tough on the officials to get that right, which they didn’t do in the preseason at all, which is why the NFL really backed off a lot,” former referee and current NBC rules analyst Terry McAulay told The Ringer in a July interview.

Why would the NFL have its competition committee tinker with proposals all spring, train officials, and advise teams on new rules all summer, and then be willing to stop enforcing the rules by the fall? Schwartz thinks the reason is simple.

“Nobody plays in the preseason anymore,” Schwartz says. “How can you test out these policies and these new rules in the preseason? If you have an emphasis on helmet-to-helmet, and you don’t have any of these starters playing in the preseason, how can you really tell how anyone’s going to react to the new rule until you actually do it?”

Holding is just the latest example of this September trial-and-error period, but certainly not the last. If this is the new norm, it’s worth examining how such a small change snowballed into a big penalty increase.

The type of block the NFL wanted to penalize is called a “lobster block,” which happens when offensive tackles botch a slingshot block. A slingshot block happens when a lineman is trying to cut off a defender from behind. It’s a highly technical and effective technique taught by the legendary offensive line coach Howard Mudd and his disciples, but it requires a lot of practice. Schwartz learned and performed slingshot blocks in Kansas City.

“We drilled it all the time, and when done properly, it’s not holding,” Schwartz said. “It’s actually not even close to holding. The problem is a lot of NFL linemen saw this being done and decided to do it on their own without even practicing it. And so what ended up happening was you had guys grabbing defensive linemen from behind instead of doing the actual technique of a slingshot.”

“The Rams really were the ones who started lobster blocking everybody,” Schwartz said. “They got lazy and started grabbing people.”

It is not a coincidence that Rams left tackle Andrew Whitworth was featured on an NFL instructional video highlighting what not to do in a lobster block, which occurs at the 7:00 mark in this video. But once referees were given hammers and told to hit the special nails, they just started swinging. Excellent blocking has drawn penalty flags this season, like this perfectly executed slingshot block by Chicago’s Charles Leno that Schwartz spotlighted on his Twitter account.

Totally bullshit holding call on @charleslenojr72 here. A slingshot isn’t a hold. A hold is defined as a restriction of a defender. What did he restrict him from doing? And this is on the backside of a toss! pic.twitter.com/UPEsrMXfi2

There’s a famous adage that holding happens on every play. Not quite, but Schwartz estimates that somewhere between a quarter and half of plays is a fair estimate. But he says one aspect of holding is critical and often lost on fans who get upset.

“Holding is not about where your hands are,” Schwartz said. “It’s about the restriction of the defender.”

If you want to see whether a defender is holding, watch their feet, not whether their hands are inside or outside the defender’s shoulders.

“If a defender is trying to get off of a block, and the [blocker’s] feet are behind that defender, that’s going to be holding,” Schwartz said. “You’re restricting him from going somewhere. If a player is grabbing someone but his feet are mirroring the defender’s feet, it’s not holding.”

Schwartz has no problem with a good penalty call, but the referees coming into the season searching for it is different.

The 49ers defense is playing at an elite level

Kyle Shanahan on Dante Pettis: He earned it