Emma Meesseman is the Mystics’ secret weapon in the WNBA playoffs 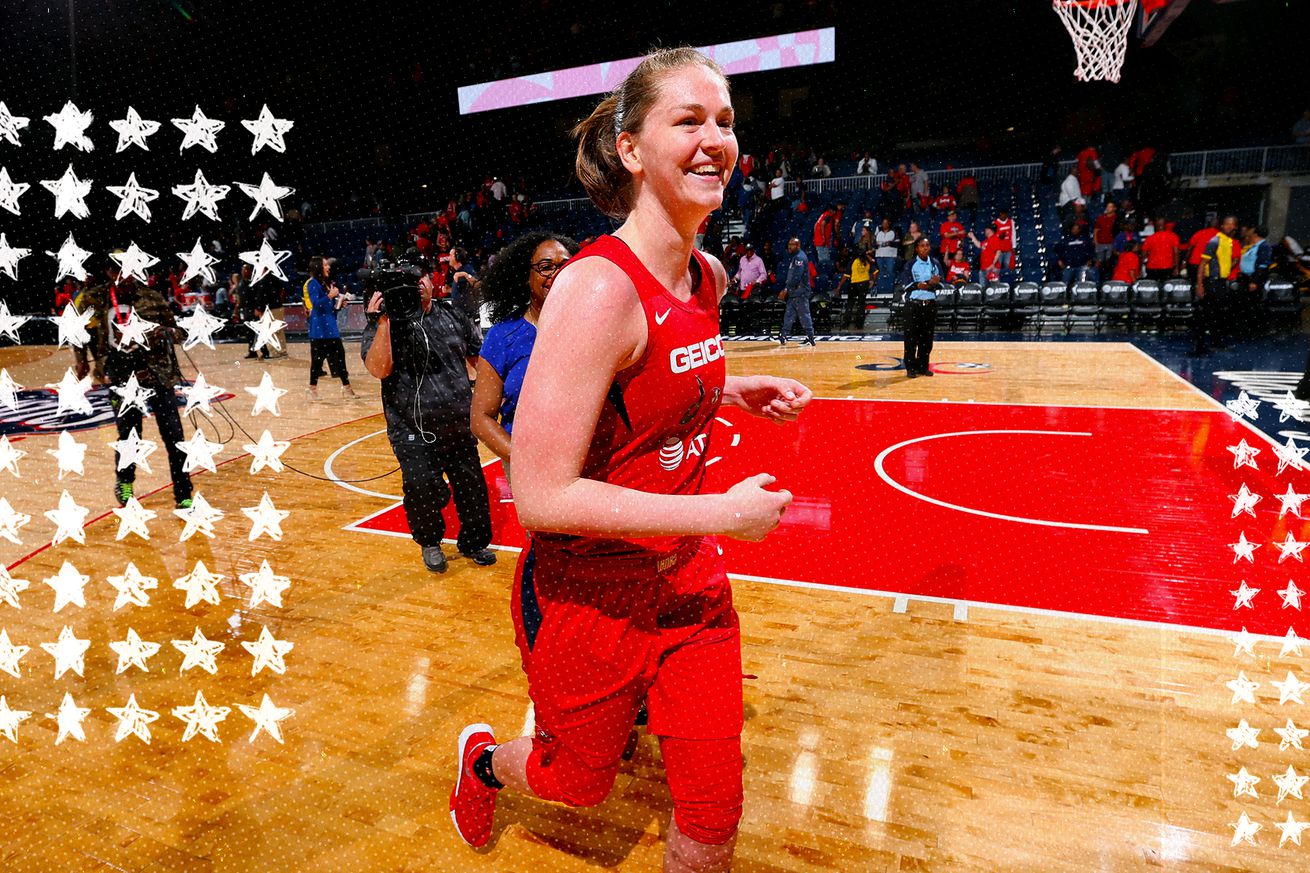 Emma Meesseman is helping lead the Mystics in the WNBA playoffs.

The Mystics big is using her unique skill set to break the Aces.

Three weeks ago, the Washington Mystics faced the closest thing to a crisis they’ll likely experience in this joyous 2019 season. Kristi Toliver, the cool veteran point guard of their high-powered attack, was out with a right knee injury. Wing Aerial Powers, a breakout performer soaking up minutes in Toliver’s absence, reinjured her left glute. With the playoffs on the horizon, Washington had only three healthy rotation players to spread across three perimeter positions: Natasha Cloud, Ariel Atkins, and the inexperienced Shatori Walker-Kimbrough.

Before an Aug. 31 game in Dallas, coach Mike Thibault chose an unconventional method to solve his dilemma. Instead of using perimeter players to fill the vacant perimeter minutes, he put big Emma Meesseman in the starting lineup, creating a jumbo frontcourt with MVP Elena Delle Donne and starting center LaToya Sanders.

As it turns out, that moment may end up saving the Mystics’ season.

Washington is up 2-0 against the formidable Las Vegas Aces in the WNBA semifinals, and it’s because Meesseman has cracked every defensive plan the Aces have tried. She followed up a 27-point Game 1 by pouring in 30 points in Game 2, helping Washington overcome Vegas’ tenacious defense on Delle Donne and relentless pace-pushing the other way.

Meesseman is a unique player in a unique situation. A slick-shooting one-time All-Star and featured Mystics building block, she had to adjust her game to accommodate Delle Donne, a superstar that plays her position. As the Mystics fine-tuned their record-breaking system around their new franchise player, Meesseman sat out the 2018 WNBA season after six years of playing nearly non-stop basketball that included helping her native Belgium overachieve in critical international tournaments. Without her, Sanders’ defensive prowess and blue-collar offensive game became the a perfect compliments to Delle Donne’s electric scoring.

Reintegrating Meesseman has been a minor nuisance all year. Delle Donne is the star and Sanders’ skill set is too important to sit for long stretches, yet it’s a waste of Meesseman’s talent to contain her in a 20-minute bench role. Thibault occasionally used the jumbo lineup featuring all three bigs within games this year, if only to squeeze in more Meesseman minutes. But with his perimeter rotation threatened by injury, Thibault took the chance to get Meesseman on the floor more by starting her.

That decision has been especially crucial in this playoff matchup. Over the two games, the Aces have focused their attention on slowing Delle Donne and anticipating the Mystics’ dynamic ball movement. They’ve toggled between man-to-man, zone, and mixtures of the two, and even started switching all screens in Game 2. Off-ball defenders have aggressively helped in the lane, hoping to beat the Mystics to the extra pass they love. The idea is to disrupt the Mystics’ flow by confusing them.

Yet that hasn’t actually happened, and Emma Meesseman is the reason. No matter what they do, the Aces cannot account for her. None of their bigs are able to step out and contest her sweet jump shot.

When they try to rush out to contain that stroke, Meesseman drives around them. Watch how she attacks at the exact moment A’ja Wilson lunges her left leg out, which sets up a Sanders jumper.

Meesseman’s skill set challenges the Aces, but her off-ball movement really confounds them. She is always moving into open space, no matter where it is or when it actually presents itself. Because she never stands still, it’s impossible to get a beeline on what she plans to do. As soon as her defender turns their head to account for another threat, she’s cutting away from them for layups or open threes.

That movement gives her a leg up even if the initial cut doesn’t bear fruit. Without actually sprinting, she runs the Aces ragged.

Meesseman’s the kind of player that succeeds in what’s known as a “wicked” learning environment, a term initially coined by economist Robin Hogarth in his 2001 book Educating Intuition. In it, Hogarth suggested that wicked learning environments are “characterized by faulty feedback that can be misleading as a result of, among other things, delays, random disturbances, absence, and other confounding factors.” This is in contrast to “kind” environments, where feedback is clear enough for people to easily adjust their behavior.

In psychological terms, the Aces’ defensive strategy is designed to create a “wicked” learning environment. By mixing up defensive coverages, packing the lane, and pre-rotating to anticipate the Mystics’ ball movement, the Aces are creating random disturbances that they hope leads to misleading feedback. This approach operates on the sensible theory that the Mystics players, like most high-level pros, succeed because they’ve mastered kind feedback loops. They’ve been drilled so precisely on common in-game situations that the Aces can’t just defend one way and hope they can out-execute them.

That’s why Meesseman has become such a wrench in their plans. She does not operate in common patterns that can be thrown off. Instead, she succeeds by adapting a simple philosophy — keep the ball and herself moving into open space, no matter where — to any situation. It’s how she’s able to seamlessly adjust her screen angle to stop Kayla McBride from going under, then dart into open space when Wilson steps up to contain the ball.

It’s how she intuitively understands that a simple step to the left is all that’s needed to get Wilson to open up a driving lane, given the Aces’ obvious goal of swarming Delle Donne in the post.

And it’s enough to understand exactly how to account for the Aces’ late adjustment in Game 2 to switch every screen. This is the one strategy I’ve been waiting to see against the Mystics all season. If done right, it could bait the Mystics into going one-on-one to attack mismatches instead of continuing to move the ball side to side.

But even that didn’t work, largely because Meesseman found ways to catch the Aces off-balanced mid-switch. On this play, she circled behind Delle Donne, all to set up a spin move back to the middle when Dearica Hamby jumped out to switch.

Later on, Meesseman delivered the ultimate off-ball checkmate sequence to the switch-everything strategy. After setting an off-ball flare screen to get the slower Liz Cambage onto her, Meesseman tried driving to the hoop.

Cambage held up nicely, forcing Meesseman to kick the ball out to Cloud in the corner. Cloud’s drive was cut off, but Meesseman noticed that Cambage stayed in the paint instead of following her back out to the perimeter. As Cloud recycled the offense, Meesseman pointed to Delle Donne to cut through, but not directly to the hoop.

Why? Because Meesseman realized that if the Aces were sticking to their switch-everything scheme, it’d be Delle Donne’s defender in Hamby, and not Cambage, that would be tasked with closing out to the perimeter. If Delle Donne cut straight to the hoop, the Aces would just have Cambage pick her up. Instead, Delle Donne cut right in front of Hamby, and that gave Meesseman this clean look for three.

In essence, Meesseman had Delle Donne set a screen not on Cambage, the defender currently guarding her, but on Hamby, the player that was going to guard her after the anticipated switch. She used her intuition to snuff out the Aces’ attempt to confuse her. That’s thriving in a wicked environment.

Without Meesseman, the Mystics’ well-oiled offensive machine would be paralyzed by indecision from the Aces’ clever defensive tricks. Instead, she and the Mystics are giving the wicked Aces a taste of their own medicine.

Fantasy football waiver wire pickups for Week 3: Go all in for this Giants RB

Steelers vs. 49ers: How will the 49ers defense attack Mason Rudolph?