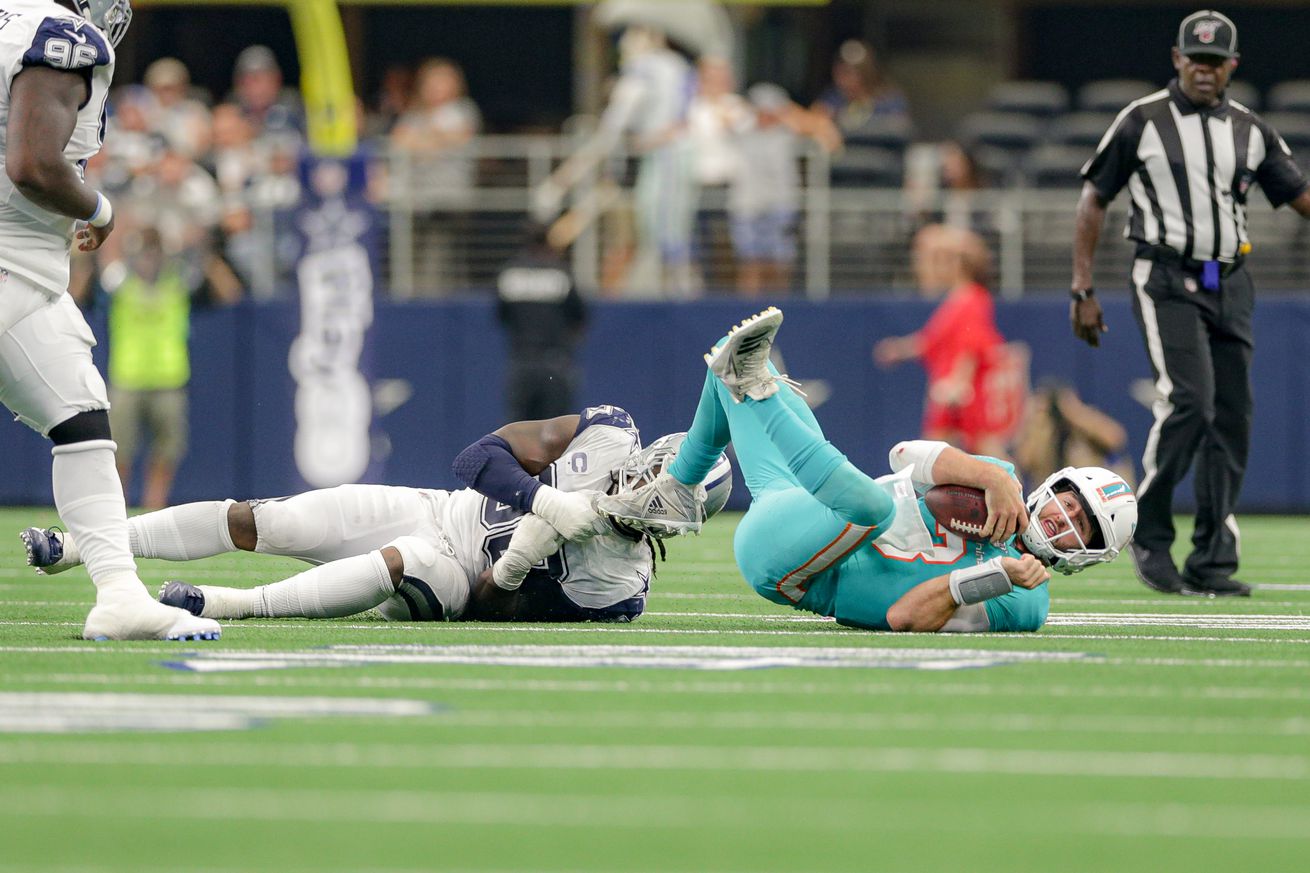 Finally, signs of life from the Hot Boyz. | Photo by Andrew Dieb/Icon Sportswire via Getty Images

There were some negatives, of course, but lots of good.

Many fans of the Dallas Cowboys may feel a bit disappointed in how the win against the Miami Dolphins went. But if you think about it, they did a bit better than the Vegas spread and that spread was huge (23.5 in some books). Meanwhile, they now have a two game cushion over the rest of their division after only playing three games. It’s time to dig into the stats and see what we can learn.

Those two sets of numbers are the points scored and total yards gained for the first three games of this season. That is what you call consistency. And very good consistency, as both numbers are above thresholds where teams win far more games than they lose.

The consistency is really more important than the actual figures involved, because things are just going to get tougher from here. The next two games are against the New Orleans Saints and the Green Bay Packers, who should both be better defenses than Dallas has faced so far. With the new era under Kellen Moore just getting started, there may be nothing more encouraging than how he has replicated the performance of his offense so remarkably from game to game. That speaks volumes about just how well he is doing his job. And with Michael Gallup possibly back as early as the next game, things could just get better. The Cowboys certainly need to do exactly that.

Those are the rushing yards for games two and three. In today’s NFL, that is somewhat amazing. This has become such a passing league that there is an ongoing argument about whether running backs really matter.

Well, that certainly looks like they matter for the Cowboys. Given that this team is built around the run, it is a great sign that they now have two wins by multiple score margins that feature a truly balanced attack. The win over the Dolphins was a true example, as they had 246 passing yards. The touchdowns were also an evenly split, although that may be a bit deceptive as the final score by Tony Pollard could be considered a garbage time TD when the game was well in hand and the Miami defense was probably getting a bit worn down. Still, being able to control the end of games with a relentless ground attack is part of the blueprint for this team. They certainly did so in this one.

Let’s stick with the ground game for a bit, and consider Ezekiel Elliott. He had one of his very good games, proving that he is one of the elite backs in the league. The most important part of this may be that he only had 21 touches in the entire game. It may not be true, but this could be an inkling that he is on a pitch count to protect the considerable investment the team made in him with his shiny new contract. If that is so, he could continue to be the huge weapon he now is all the way to its end. That may be possible now because of the next stat line.

That is what Tony Pollard did. When was the last time the Cowboys had two 100 yard rushers in one game?

The last time the Cowboys had two 100-yard rushers in one game was in 1998 (Emmitt Smith 122 yards, Chris Warren 104) when Jason Garrett started at quarterback.

And let us not forget this was just Pollard’s third game as a pro. Most of us thought he was going to be a change of pace weapon when he was drafted. Now he is showing he can also be a highly productive workhorse. Suddenly all the eggs aren’t in the Zeke basket, and that is a very, very good thing.

One more on running:

The real problem with things like “establishing the run” is that they often don’t accomplish what they need to. There are too many “failed” plays that just put the offense behind schedule and wind up in punts.

When you are moving the sticks with your backs, that is doing it intelligently, and that points once again to the Moore influence. While from an objective, analytical stance it is not conclusive, especially given the early stage of the season, it is a possible bit of data to indicate that Moore is just as adept with rushing the ball as he is in calling passes. Meanwhile, from a personal viewpoint, I would suggest “Oh, all the yeahs.”

We were all a bit dismayed when Dak Prescott threw that interception. It was almost certainly the worst decision he has made all year on the field. He stated in post game interviews that he got greedy. He should have either thrown the ball away or tucked it and took off. It looked like he had a lot of green to work with.

Given his obvious work ethic and desire to excel, that play will go into his ROM and inform future decisions. It is a valid tradeoff in a solid win.

More importantly, that ratio is one that can sustain a lot of success. Prescott continues to show his growth in his proficiency. Given that he is just in his fourth year, that bodes extremely well.

Amari Cooper had another huge game, and now has four touchdowns on the season. This was with Gallup, the team’s leading receiver in yardage the first two weeks, out for what is hoped will not be long. The defense knew Cooper was going to be the big threat and they didn’t really stop him.

Given that the one incompletion was a drop, it also shows just how good the chemistry and timing is between Cooper and Prescott. The wide receiver is just getting started in Dallas. It should be fun to watch.

That is Jason Witten. If there were still any doubts that getting him back was a plus for the team, they should just about be wiped away by now. The 33-yard reception he made on a third and 20 play was a master class in working with his quarterback to salvage a bad situation, leading to the Cowboys’ first touchdown. It was reminiscent of some of the best work Witten did with Tony Romo. That is beautiful.

It wasn’t all good, and this is the most glaring bad thing. The defense repeatedly kept Miami possessions alive with these errors. Some may have been a bit shaky, but the team just cannot keep putting itself in these situations. The offense again showed a remarkable resilience in overcoming their errors, as Prescott and Witten did on that catch mentioned above, but it is far better to just not get flagged in the first place.

We’ve praised Prescott a lot this season, and he would go on to have a strong second half. But that is his line at halftime, and it clearly is a bad one, outside the Cooper touchdown. In the end, it didn’t hurt the team, but against better teams, that kind of bad stretch could create too big a hole to climb out. We can be assured he is going to study his mistakes and work on it, as will the receivers who had some drops, to try and avoid them going forward.

This was supposed to be the game where the Hot Boyz got on track. But through the first half, it was just not materializing. Josh Rosen and, during his brief time while Rosen was being checked out after a hard tackle, Ryan Fitzpatrick, were elusive, just getting away from rushers while delivering on-target throws. The scheme played a role, as the plays were often quick developing with the ball coming out fast.

Things finally came to life in the second half. Robert Quinn was rude to his former team getting the first sack, Maliek Collins and Kerry Hyder split one, and DeMarcus Lawrence finally got on the stat sheet late in the game. Christian Covington and Joe Jackson had batted passes on back-to-back plays as well. Those can lead to interceptions. Which still needs to happen.

Takeaways are still not happening, as the Cowboys still are looking for their first interception of the year. They did get the forced fumble from Jaylon Smith, who kinda quietly had a good game with a team-leading 10 total tackles. Lawrence got on the ball to snuff out a scoring threat that could have given the Dolphins a halftime lead and a dangerous emotional lift. But this team has to find a way to take the ball away more.

Of all the numbers discussed, this is the one that may have the most significance. Thanks to the Philadelphia Eagles dropping one at home to the Detroit Lions, the Cowboys now have a full two game lead for the NFC East. And it is doubly sweet because of this.

So despite the warts, sit back and enjoy this W. There were far more positive than negative numbers, after all.

Skip Bayless blames LeBron James for his lack of sleep, but his obsession with James and his 2 a.m. wakeups are better culprits

Why Gardner Minshew is exactly what the Jaguars need

Our Brief NFL Holding Nightmare May Finally Be Over