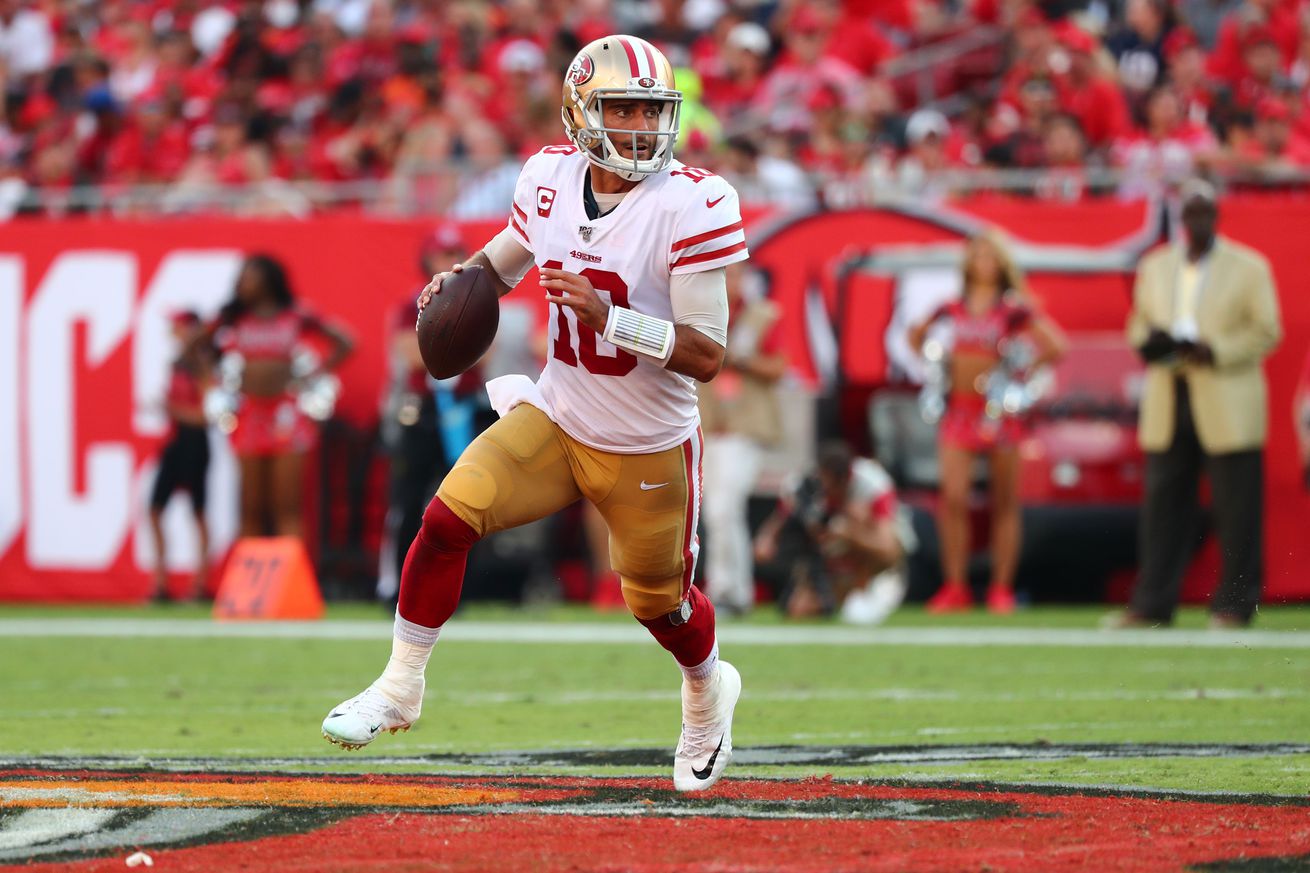 Addressing your 49ers comments, questions and concerns before the 49ers take on the Steelers in Week 3.

We’re just days away from the San Francisco 49ers’ Week 3 home opener against the Pittsburgh Steelers at Levi’s Stadium. Kyle Shanahan has his team rolling after stringing together consecutive wins on the road against the Tampa Bay Buccaneers and Cincinnati Bengals, besting the latter 41 to 17.

We’re back with our Week 3 mailbag column. You’re welcome to drop questions in here for next week’s mailbag or tweet me @Rob_Lowder.

Do you think the 49ers’ momentum is sustainable? Zachary

I do, Zach. The 49ers are preparing to face a struggling Steelers team that will be fielding backup quarterback Mason Rudolph, filling in for the injured Ben Roethlisberger. It has the makings of a “trap game” of sorts for the 49ers, who are favored by 6.5 points, but the team’s shown a well-rounded brand of football through two weeks that should make for another convincing win. I’m looking forward to the energy level at Levi’s Stadium, which I assume will be rowdier than usual. A win in Week 3 would give the 49ers a ton of steam heading into their Monday night matchup against the up-and-down Cleveland Browns, also at Levi’s Stadium - another winnable game. The 49ers heading into their Week 4 bye at 3-0 is a realistic scenario but knock on wood anyways.

Would you agree to give up a first-round pick for CB Jalen Ramsey? Patrick

In case you’ve been living under a rock, Jacksonville Jaguars cornerback Jalen Ramsey requested a trade. He’s among the league’s best cornerbacks - a perceived position of need for the 49ers heading into 2019. Through two games, both Richard Sherman and Ahkello Witherspoon have played well, quelling any outcry about the lack of investments in the secondary. Even still, no team should ever turn away a chance to trade for one of the league’s best. I would give up a first-round pick in a heartbeat for Ramsey, even if that creates some turmoil among the 49ers’ starting lineup. Salary cap guru Paraag Marathe would have his work cut out for him, extended Ramsey while attempting to re-sign the likes of DeForest Buckner and George Kittle, but that can all get worked out later. Easy for me to say, right?

Would you trade CB Ahkello Witherspoon and a 1st-round pick for CB Jalen Ramsey? Bradley

Here’s where I begin to pump the brakes. While I do believe surrendering cornerback Ahkello Witherspoon and a 1st-rounder is still worth Ramsey, you have to consider the future of the secondary. You’re now fielding Ramsey and Sherman, a blockbuster duo for as long as the veteran remains effective and in the lineup. But it’s fair to wonder how long Sherman plans on playing. He’s signed through the 2020 season and is due $10 million, just one million of which is guaranteed. In this scenario, when the 49ers would already be paying Ramsey huge money, could Sherman become a cap casualty? The secondary outside of Ramsey would immediately become a huge need. There isn’t a way to trade for and pay Ramsey without creating some roster and salary cap problems, especially if you part with Witherspoon, but as I said earlier, he’s good enough to warrant the headache.

The 49ers elected to pick up defensive lineman Arik Armstead’s $9 million fifth-year option prior to the 2018 season. Armstead responded by having a solid season, starting 16 games for the first time in his career after injuries derailed the two years prior. He totaled 48 tackles, six tackles for loss, 12 quarterback hits and three sacks last season. So far in 2019, Armstead already sacked the quarterback twice and added eight tackles, three tackles for loss and two quarterback hits. The priority is DeForest Buckner, but if I’m the 49ers, I’m making a solid effort to keep the former Oregon teammates together.

Are you concerned about DL Dee Ford’s injured knee? Bruno

I think it’s fair to be concerned about the nagging knee injury for pass rusher Dee Ford, although I’m not there yet. If he practices today, then he’s likely to play on Sunday against the Steelers. Ford hasn’t practiced this week and missed most of training camp while the team rested his knee, suffering from reoccurring tendinitis. It also looked like he aggravated it during the Steelers game. Ford has battled with leg and back injuries throughout his career, and the 49ers took on a fair amount of risk in trading for and signing Ford to a long-term deal. His health moving forward will be something to watch, moving forward.

It’s so hard to say, but I lean toward yes. Joe Staley is an elite offensive tackle, and there will always be implications when one is no longer in the lineup. Shanahan’s gameplans moving forward will need to constantly factor in the liability of Staley’s replacement, sixth-round pick Justin Skule. I understand that may sound harsh, but the 49ers rookie tackle struggled during the preseason against players that didn’t even make a 53-man roster. Even when kept clean, quarterback Jimmy Garoppolo knows Staley is no longer protecting his backside. Will the 49ers quarterback be able to maintain his focus downfield? It’s tough to quantify, but losing Staley will impact games, and at worst, wins.

We’ll get a better picture of how Shanahan is going to adapt to Skule’s presence on Sunday. If I had to guess, I’d envision a heavy amount of short passes, screens and play-action plays that cater to Skule’s strength of run blocking rather than pass protecting. The Steelers are likely to heavily pressure Skule’s side of the line with blitzes and stunts, testing the rookie’s knowledge of scheme and adjustments. Shanahan is smart enough to know all of this and is clever enough to adapt. It’ll be an interesting game of cat and mouse.

I definitely do, Tiny. I think George Kittle will be a key component of the 49ers’ short passing game that I expect to take prevalence against the Steelers. I wouldn’t be surprised if he leads the team in targets. After breaking the receiving yard record for tight ends last year, Kittle has gotten off to a slower start in 2019. Through two games, he’s totaled 11 receptions for 108 yards to no fault of his own. The offense has been much more diverse with Garoppolo back in the starting lineup. Kittle’s also been a force in the run game, as well, creating blocking highlights on a weekly basis.

Running back Tevin Coleman has been out for nearly two weeks with a high-ankle sprain suffered during the team’s season-opener against the Tampa Bay Buccaneers. The injury is a fickle one, especially for a running back. The 49ers expect to have Coleman back after their Week 5 bye. In the meantime, it’s been “The Matt Breida and Raheem Mostert show.” The pair combined for 204 yards on 25 carries against the Bengals, averaging over eight yards per rush

Trent Taylor was placed on injured reserve on Friday, meaning he can’t return to the roster for another eight weeks. It’s a significant setback for a wideout the team thought would be back after the bye week. Jalen Hurd (back) is still on track to return after the team’s Week 4 week off. Taylor was the 49ers’ most prevalent receiver throughout training camp and far-and-away Garoppolo’s favorite target. Hurd made his mark in the 49ers’ preseason opener against the Dallas Cowboys, authoring two impressive touchdowns.

The 2019 NFL season is already over for these 10 teams

Komodo dragons can’t paralyze people by spitting on them, but they still don’t make good mascots